Kevin, a reader of this blog from Missouri, asked me for some pointers on outdoor hog genetics.  His son has been raising hogs and plans to expand his breeding stock herd to meet a new marketing opportunity.  Since he wants to expand quickly, he’s going to need to purchase females, either gilts or sows.

I recommended he find one herd to purchase from for health reasons instead of purchasing from several different herds.  For outdoor swine genetics in Missouri I recommended contacting Kelly Klober ,as he is the expert down there.  If he wanted to try conventional genetics, I’ve been pleased with the offspring from AI from Waldo Genetics in Nebraska.

I used to pick my AI boars based on figures and phenotype.  This is the more expensive option as SGI charges more if you pick the boar.  The last few years I’ve had the salesman pick the boar as I realized they know the boars better than I.  I almost always ask for mothering ability and meat quality.  A couple times ago I asked for an aggressive natural breeder and they selected a boar called Wonka, and sure enough, his sons were excellent breeders.

I’ve never had any problem with any line of hogs not wanting to graze, especially if they are limit fed.  If they are on full feed of grain, they will spend more time rooting out of boredom and less time eating forages.

The sows and gilts in these two photos are receiving three pounds of grain each.  This is roughly half of what they would need if they had no access to forage, and only a quarter of what they would eat if they were on full feed of grain.  So these hogs take grazing seriously and don’t spend much time rooting except for in their wallow.

I have however experienced gilts and sows who had poor instincts for outdoor farrowing.  Even with many generations farrowing outdoors on the mother’s side, the wrong AI boar can sire nervous, poor instinct, mothers.

The sow in the top photo is out of an AI Landrace boar called True Blue.  All the sows out of True Blue are excellent outdoor mothers, farrowing and raising large litters.  Samsung is an AI Landrace sire I used at the same time and added several of his offspring to my herd.  These sows however, farrowed large litters, but were nervous and crushed up to half of their offspring.  They also showed very little instinct for nest building.

That’s the problem with using AI from conventional producers.  It’s hit and miss.  There are so few producers farrowing and raising outdoor hogs, there is really no knowledge of these instincts.  I’m sure the daughters of Samsung would have worked fine in confinement.  Much better probably than my red sows which grow to over 600 lbs and would not even fit properly in the gestation and farrowing crates that most of the industry uses.

Maybe some sort of organization for outdoor swine breeders would be nice.  But I’m not much of an organizer.  I guess the best I can do right now is share my experiences and read about others’ experiences on their blogs.  My next post is going to go into more detail about my breeding philosophy. 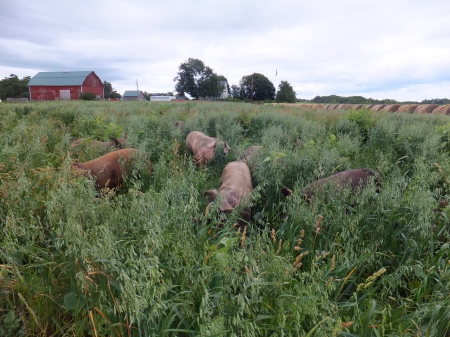 This entry was posted on Monday, July 3rd, 2017 at 8:44 pm and is filed under Curious genetics, Curious hogs. You can follow any responses to this entry through the RSS 2.0 feed. You can leave a response, or trackback from your own site.