Duroc gilt in the woods with her litter of eleven piglets.  Fourteen gilts farrowed this summer.  It’s amazing how well they do in the warm months compared to the struggles I had last March.

Most farrowed in a shelter, or I put a shelter over them after farrowing, as I let each choose her own spot to farrow.  Two gilts were in a spot in the woods inaccessible to a shelter so I left them alone.  They raised ten and eleven piglets each.

I wouldn’t have had the courage to farm this way without reading other bloggers, specifically the granddaddy of farm bloggers, Walter Jeffries.  Recently, he posted a photo showing a 300 lb, eight-month-old boar, raised on nothing but pasture and dairy products.  Walter is a paradigm shifter for me.

I’ve been without a computer for the past couple of months, hence my lack of posts, but I’ve kept up on the farm blogs I read and enjoy and wanted to share some more with you.

Bruce King wrangles with government agents and speaks at government meetings.  I love hearing about his civic adventures.  He also purchased a confinement dairy farm recently and is transforming it to his vision.

Andrew at Green Machine Farm writes about his new life as a farmer.  He educated us on bat houses recently.  Would you believe he made a bat house out of plywood, painted it black, and placed it on the south side of a shed?  How anything could survive a midwestern summer in that box and not cook to death is beyond me, but Andrew informs us he already has bats living in it.

Gordon Milligan is a train conductor in Chicago.  He has a dream to farm and raise his own food when he retires.  He and his wife recently purchased a farm in Iowa and are anxiously awaiting the day they will call it home.

Lastly, I read a blog from a farmer in France.  I like to see what Brent is doing with his farm because the soils and underlying limestone are extremely similar to my farm.  He grass-finishes Salers cattle, grazing alfalfa/orchard grass hay fields.  Check out his blog and see if the photos of his land seem similar to mine, like in the photo below of my steers grazing a fresh hay field. 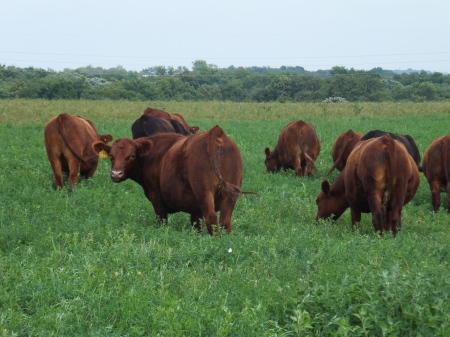 This entry was posted on Thursday, September 19th, 2013 at 1:46 am and is filed under Curious farmer, Curious hogs, Uncategorized. You can follow any responses to this entry through the RSS 2.0 feed. You can leave a response, or trackback from your own site.