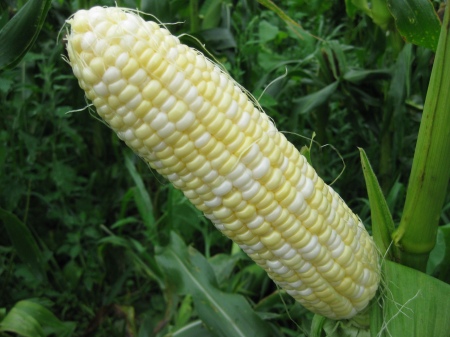 I picked 3 dozen ears of sweet corn to give to friends.  Two friends were home and gladly accepted the gift.  I drove around town wondering what to do with the remaining dozen.

A temporary taco stand was set up in the park by main street.

“Maybe they would be up for a trade,” I thought as I parked my car.

“How many tacos you want?” a woman asked me.

“Uuuuh,” I said and walked over to where a man was cooking meat on a large, flat grill.

“How many tacos you want?” he asked me.

I realized I was acting quite weird.

The cook looked confused and uncomfortable.  The woman sidled over to help translate.

I set the bag of sweet corn on a cooler.  When the cook stopped turning the meat, I took out an ear and pulled the husk back to show the plump, yellow and white kernels.

The cook said something excitedly in Spanish to the woman.

I wasn’t sure what he was driving at.

He nodded and went back to cooking.

My friend from Honduras tells me most of the Hispanic immigrants in Lafayette county are from small towns and rural areas of Mexico.  They came to the US for work, of course.  But they enjoy the bucolic atmosphere of Lafayette county.

They began wrapping up the tacos and the woman said, “He’s giving you four.”

We country folk sure know how to drive a hard bargain.

This entry was posted on Monday, August 10th, 2009 at 2:11 pm and is filed under Curious food, Curious living. You can follow any responses to this entry through the RSS 2.0 feed. You can leave a response, or trackback from your own site.

3 Responses to Sweet Corn for Tacos