The Protest in Madison, Wisconsin

I took the boys to the protest in Madison.  This is the 26th day.  There was a “Farmer Labor Tractorcade” in the morning.

At first the boys didn’t understand what was happening, but they liked the excitement.  Children pay attention when adults are excited about something.  I did my best to explain the complicated issues to the boys without simplifying too much. 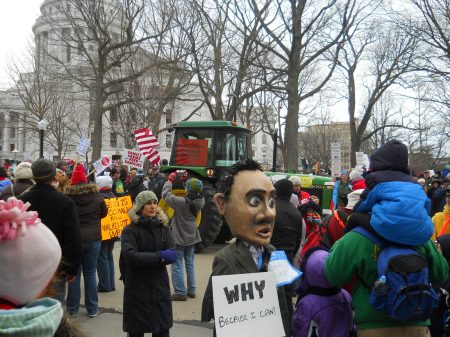 The way Governor Walker is ramming his agenda down our throats is probably what riles the people of Wisconsin the most.  He has always claimed it’s about the budget, but when he couldn’t get the 14 Democrat senators who fled the state to return to make a quorum, the bill to eliminate collective bargaining was stripped from the budget bill, and passed in two hours.

The last few years has seen the rise of the Tea Party, which is considered Right Wing.  This movement would be considered Left Wing.  They are approaching the problems from different angles,  but it boils down to Americans concerned about their future and the future of their country.

I’m so glad to live in a country that allows peaceful protests.  My favorite chant of the day says it best:

This entry was posted on Sunday, March 13th, 2011 at 12:42 am and is filed under Curious government, Curious living. You can follow any responses to this entry through the RSS 2.0 feed. You can leave a response, or trackback from your own site.

7 Responses to The Protest in Madison, Wisconsin