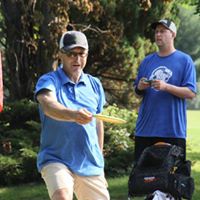 August, 2014, driving into Darlington, my hometown. “Are those disc golf baskets?” I exclaimed. Yes, disc golf had come to Darlington, with 9 baskets placed around the perimeter of swimming pool park.

I was excited. About fifteen years ago I had taken up the sport when a friend introduced me to it. I bought a couple of discs and enjoyed playing at Platteville. I seemed to have a natural affinity for the sport as I have always loved throwing frisbees.

When Doug moved to Vermont, I quit playing and didn’t think about the sport much. But when I saw the baskets in Darlington I was eager to give it a try again.

I found a great group of guys who played a doubles league on Sundays and I could hold my own. The Halloween doubles tournament arrived and I showed up even though I had no partner. I was partnered with a pretty good player from Madison and we managed to tie for third place. ‘I’m pretty good at this,’ I thought.

So I joined the PDGA and signed up for my first sanctioned tournament in 2015.  I wasn’t sure which division to sign up for so I signed up for Pro Masters.  I played as well as I could at the time, but finished last.

Undeterred, I continued to practice.  At another tournament I learned that Madison would be hosting Amateur worlds in 2016, but you needed a certain number of points to qualify.  You receive points for every competitor you beat.

So I started playing in a lower division to get more points, and managed to win my first tournament in a thrilling comeback.  Now I was really hooked.

The next year Worlds at Madison was a great experience with competitors from all around the world.  I finished 53rd out of 71 competitors in the Advanced Masters division, (40-49 years of age).    Not as good as I hoped, but I continued to practice.  I won two more tournaments in 2016.

This year I wasn’t sure if I would take the time to play Worlds.  But it was located in the Quad Cities of Iowa and Illinois, only 2 and a half hours from my home.  So I decided to play and finished about the same as last year, 58th out of 76 competitors.  Another great experience, though.

This was where these photos were taken.  At the top is me, driving, or throwing off the tee.  The bottom photo is me putting.  You can tell I take it seriously, but so does everyone else who play at this level.

It looks like my disc golf career is going to have to slow as I am taking a more active role in the marketing of Jordandal farms meat.  I’ve been selling most Saturdays at the Westside Farmers Market in Madison.  Most tournaments are on Saturdays, some on Sundays, but even the Sunday tournaments will be difficult as the Farmers Market is more taxing than most would guess unless you’ve experienced it. 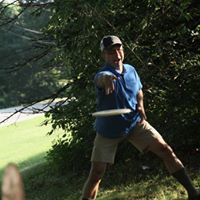 This entry was posted on Tuesday, August 29th, 2017 at 12:13 am and is filed under Curious farmer, Curious fitness. You can follow any responses to this entry through the RSS 2.0 feed. You can leave a response, or trackback from your own site.