Contest: How Much Wood for Outdoor Wood Boiler?

How many days to burn the row pictured?  The dimensions are about five feet tall, by sixteen feet long, by sixteen inch logs.  This is about eighty percent of a cord of wood which is 128 cubic feet, the industry standard for firewood.

It’s mostly dry oak, although it was rained on the day before I took this picture.  And now another winter storm has dumped snow on it, but it still burns well.

You can look at this old post for hints.  Also notice the changing color of the lawn.

I’ll start burning this row February  1st.  You have a week to guess in the comments.  The prize for the closest guess is negotiable.  In the past I have given gift certificates to Kiva, and meat.  Good luck!

I hope my old friends guess.  I also hope some of the newer visitors will guess and introduce yourself.  Ever since Bruce King put my blog on the sidebar of his excellent blog, I’ve had more international visitors.

Bruce raises chickens and hogs on some highly fertile bottom ground in the state of Washington.  He also recently purchased a confinement dairy farm.

Click on this link if you want to read more about my Outdoor Wood Boiler.  Below is a photo of the ash pan.  That is the amount of ash after two days, which is about how often I remove the ash. 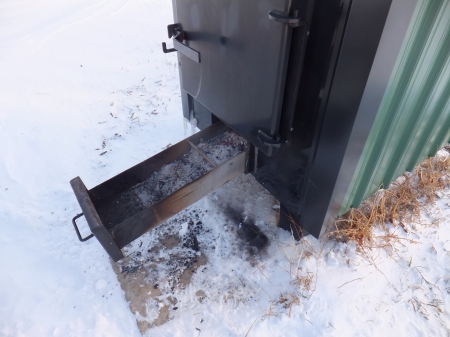 It’s too many.  She only has 14 teats, and the piglets are smaller than I like.  I won’t keep any of her offspring for breeding, as I would much rather have 10 to 12 larger piglets born per litter.  But it’s still nice to note a record.

I went to an informational meeting on how crops are being affected by the drought, and how we can use the stressed crops.  The University of Wisconsin Agriculture agents lead the meeting.  It was well attended with many interested farmers.  The meeting was a little depressing, but my troubles were put into perspective as I drove home.

When I drove to the meeting I noticed a line of people on the sidewalk near the Catholic Church.  I wasn’t sure why they were lining up.  When I drove home, the line was huge and leading to a semi trailer which read something like “Catholic Mission” on the side.  The people were lined up to get food.

Cutting Down a Tree in the Yard

My friend helped me cut down a tree in our yard.  Half of it split and damaged the house three years ago, and I was dragging my feet cutting the other half down because its a nice tree with late afternoon shade for the house.  Now that its gone though, I’m glad.  Most of the trunk was dead, only about a two-inch section on one side was alive.

We put a rope up high in the tree around the bigger branches to help guide the tree and tied it to my tractor.  We weren’t entirely successful at guiding the tree, as the tree took out the power line when it fell, but I’m thankful we missed the house and shed and no one was injured.

Country Outfitter, a retailer of Dickies, sent me this Dickies premium insulated bib overall to review.

Adam from Country Outfitter asked if I would like to review a pair of boots.  I checked out their site and regretted to inform them I don’t wear cowboy boots.

“How about something else?”

I found these insulated Bibs.  So far I love them.  They are super warm.  I normally wear uninsulated Dickies with long underwear, but wanted to try something different  when the weather is brutal.

I’m going to wait and wear them for a winter season before I give my final review.

Brotherhood of the Combover Men 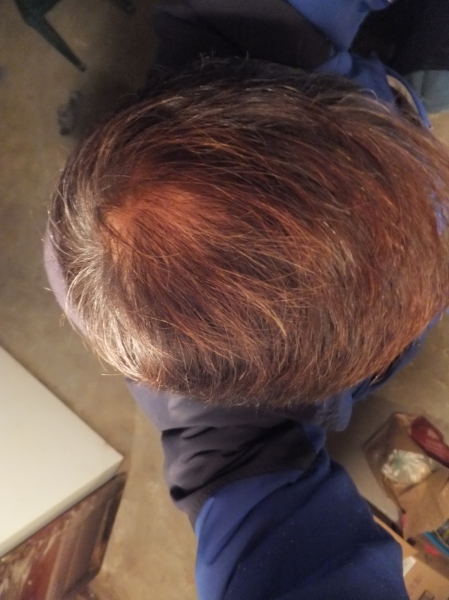 I’ve started the “combover.”  I wanted to document this moment in time and let you know that, speaking for all “combover men”, ‘yes, we know we are leaving our hair longer and combing it over thinner areas.’  We just want everyone to pretend it’s not happening.  We think of ourselves as thick-haired studs, and would appreciate it if you would pretend to think that as well.

A woman was cutting my hair about ten years ago.  I asked her if my hair was thinning.  She said no, but too emphatically.  I knew she was lying, and I think she knew I knew she was lying, but I realized the delicate dance which had just started for me and would not be finished until I was dead or shaved my head.

The last couple of years my barber has started leaving my hair longer in certain places, and it’s funny how it just falls into place across the thinner areas.  And by ‘fall into place’ I mean, incessant stroking with my right hand in a diagonal, back-to-front motion.  My barber never acknowledged he was doing this, and I never brought it up.  I had joined the “brotherhood of the combover men.”

Looking Out For Me

The hind end of our old Massey 750 combine, kicking out cobs.

You ever notice people driving down the road with a dent in their car, and then the driver does the maneuver, (tailgating, veering into the other lane, etc.), which probably caused the previous dent?

The dents on this combine tell a similar story, except we have an excuse, it’s impossible to see directly behind.  If you ever find yourself behind a combine, look out.

I have several people looking out for me, and it’s nice.  When they find an article they think may be of interest to me, they tweet or email.  Thank you.  I appreciate it.

The Protest in Madison, Wisconsin 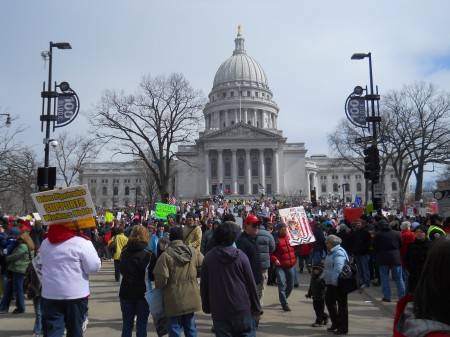 I took the boys to the protest in Madison.  This is the 26th day.  There was a “Farmer Labor Tractorcade” in the morning.

At first the boys didn’t understand what was happening, but they liked the excitement.  Children pay attention when adults are excited about something.  I did my best to explain the complicated issues to the boys without simplifying too much.

The way Governor Walker is ramming his agenda down our throats is probably what riles the people of Wisconsin the most.  He has always claimed it’s about the budget, but when he couldn’t get the 14 Democrat senators who fled the state to return to make a quorum, the bill to eliminate collective bargaining was stripped from the budget bill, and passed in two hours.

The last few years has seen the rise of the Tea Party, which is considered Right Wing.  This movement would be considered Left Wing.  They are approaching the problems from different angles,  but it boils down to Americans concerned about their future and the future of their country.

I’m so glad to live in a country that allows peaceful protests.  My favorite chant of the day says it best:

In, “Chicks, Fun and Trouble,” I told about the new chicks we received by mail.  WSB asked for more pictures when they were grown.

I took these pictures yesterday.  The chickens are enjoying getting out of the barn, scratching, grazing, picking up rocks for their crop.  It’s been a long winter, stuck in the barn.

Today we have a snowstorm and school is canceled.  Seems like Mother Nature always teases us.  What’s the saying?  “Robins always get three snows on their backs?”

Below are three of the chicks, grown.  An Araucana, White Rock, and Barred Rock.  They are laying beautiful, little, pullet eggs.

Also, I want to say thank you to all the women in my life.  Today is the 100th International Women’s Day. It was started in 1911 to honor the Suffragettes, who fought for womens’ right to vote. 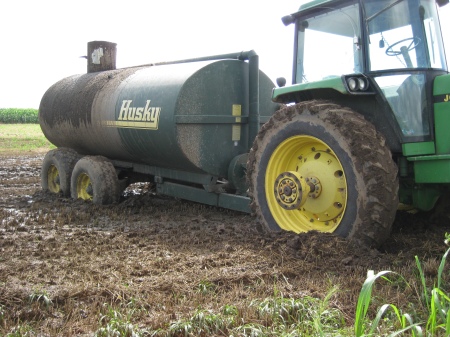 School started two hours late today, let out an hour early.  My 4-wheel drive SUV made it half-way down my quarter-mile lane before the snow proved too deep.  My Dad pulled me out with the tractor, and pulled us back in.  It’s supposed to start snowing again tonight, with wind.  If you want to visit, and you don’t have a snowmobile, you’re going to be walking.  We’re stuck.

I’m stuck with this blog, and having trouble getting restarted.  There is a reason I post every week, and it’s not because of popular demand.  It’s how I’m wired. I like starting every day with chores.

And so, I’m publicly announcing my intention to post every week, even though I still feel stuck.

I think this blog works best when I’m answering a question.  Some questions I want to answer:

How much wood does my outdoor wood boiler use?

How much fuel does my farm use?

Why can hogs digest acorns without processing?

How long did the “wild west” last?  Side note: I think a major contributor to the wild west was post-traumatic stress disorder from the civil war veterans.

Another thing I want to look at more closely is how a square foot of land changes throughout the year.  I think I know, but forcing myself to look every week, and take a picture, may prove eye-opening.

Until next week, stay warm.

Taking a Break, Making the Best of… 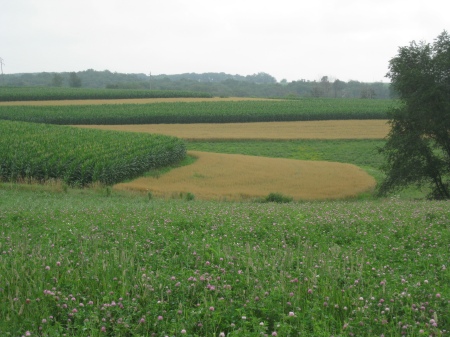 Red clover hay field.  This field is an example of making the best of a bad situation.

The cowherd winters on cropland, walking into the woods for shelter, and water out of springs.  We feed the cows by unrolling round bales of hay on the harvested corn fields.  This is a way to spread the fertility from the cows’ manure, and the damage from the cows’ hooves if the ground is not frozen.

The hayfield above was exposed to the cows, and even though we never fed them hay on it, they chose to stand on it often.  When the ground thawed, the cows did considerable damage to the alfalfa plants.

We monitored the field as everything started to green up in the spring.  We could see most of the alfalfa had been killed and it would not be a productive field.  We had three choices: 1. Do nothing and accept the reduced yield.  2. Till it and plant corn.  3. Plant another forage crop.

We didn’t need the corn acres, and it would mess up our rotation if we put it in corn this year.  It wasn’t slated to be a corn field until 2011.

We decided to plant another forage crop.  There are some grasses which people plant in this type of emergency: Italian Ryegrass, Teff grass.  We wanted a legume, though, which would fix nitrogen for next year’s corn crop, which is what the alfalfa would have done.

We chose Red Clover.  There are disadvantages to Red Clover.  It is short-lived, and it doesn’t dry well for hay.  The first reason didn’t matter in this case, and we decided to try to find dry times to make the Red Clover hay to take care of the second disadavantage.

The main advantage to Red Clover is it’s very easy to plant.  We broadcasted the seed with a small spreader from the back of a tractor, and pulled a chain harrow to cover the seed with a little bit of dirt.  We planted four pounds per acre.

It worked great!  Look at how thick the reddish flowers are in the picture.  We made the best of a bad situation.

And so, I can no longer put off addressing the title of this post.