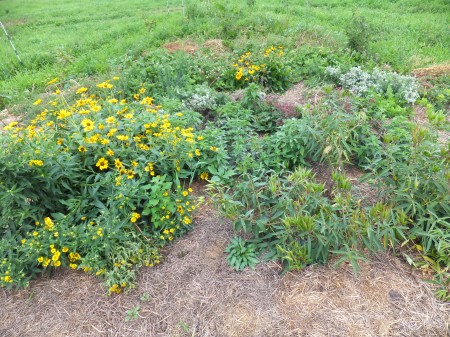 The above photo was taken August 10th.  It’s my Native Pollinator Garden which I grew from transplants, planted in June.  Insects were attracted to the garden, with a favorite plant being Hairy Mountain Mint, small white flowers near the top of the photo.

The orange and black beetles, pictured below, blanketed the Mint.  I had never seen this beetle before and I immediately thought, “Oh no, I’ve attracted a new pest.”  Looking back, it’s amazing to see my negative bias.

This winter I picked up a new book from The Xerces Society, “Farming with Native Beneficial Insects“, and in there was a picture of my beetle in the Predatory Insects section.  The Goldenrod Soldier Beetle eats insect larvae and eggs, aphids, and slugs.  The adult Soldier Beetle needs nectar and pollen to survive, which they were getting from my garden.  My garden was doing exactly what I wanted it to do, but my negative bias kept me from recognizing it.

In the photo below you can see what I think is a Blue Mud Dauber Wasp, which provides size comparison to the Soldier Beetles. I should also say Soldier Beetles are related to Fireflies, which we see plenty of on summer nights.

The photo below is of some type of Tachina Fly.  I’m amazed to say I’ve also gained an appreciation for flies.  I guess the ability to see insect nature up-close is helping me appreciate it.  I enjoy seeing the megafauna like deer, turkey, bald eagle, but you never get to really examine them unless they are dead.  Most of these insects, however, don’t mind your nose being a foot away.

It’s not all peaceful though.  Much is written about the plight of the Monarch butterfly, probably exaggerated, but I try to leave some Milkweed growing and keep an eye on the Monarch population.  I’m happy to say I’ve seen many Monarch caterpillars, but am sorry to say I haven’t seen any pupate.

I watch the caterpillars daily.  Once you know where they are it’s pretty easy to find them again.  One day I checked a big caterpillar twice, only to find it shriveled to a third of its original size, with a predatory Stink bug in the process of sucking the remaining juices out of it.

Even though I was disappointed the Monarch caterpillar was dead, I left the Stink bug alone.  I realized it’s always a balance, and beyond creating a decent habitat, there is little I should do.

This entry was posted on Monday, January 26th, 2015 at 7:28 pm and is filed under Curious farmer, Curious nature. You can follow any responses to this entry through the RSS 2.0 feed. You can leave a response, or trackback from your own site.