A farming couple from Wisconsin has been emailing questions about farrowing in hoop barns. I’ve been answering their questions, but I realized I haven’t posted a summary of my latest farrowing iteration.
These photos show the way the hoop barn was set up for the late November, early December litters. They did very well. Almost all of them chose a hut to farrow in, and with no outstandingly bad litters, they managed to wean a 9 average, which I am very happy with.

The 18 feet at the south end of my hoop barns is concrete on which the waterer and feeders are situated.  The remaining 66 feet is bare dirt, covered with sand, then deep straw bedding.  I positioned 6 farrowing huts along each side and probably could have fit 7, but I took up some space with large straw bales positioned on each side so that I would have slices I could use to add a little fresh bedding as needed.  You can see some of the slices positioned on top of some of the huts.

I split the south end with wire panels at the waterer, so that my gestating sows could come into the building to drink, but would be separated from the lactating sows and piglets.  Thawed water is a problem in a Wisconsin winter, so any place that has a heated waterer is valuable.  Click on the photo above to see more detail.  The girl in the photos is a friend of the family.  We were walking the goats, hence the funny looking animal in the background. 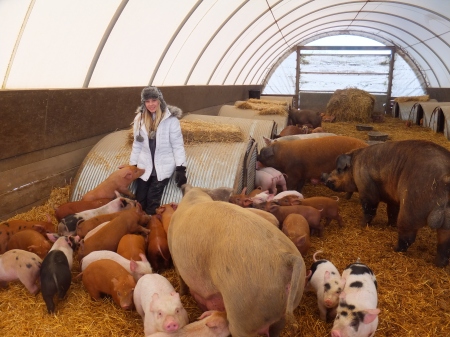 I had a couple of problems, but was very lucky as one problem ended up solving the other.  You can see the piglets are very similar in size.  This is because the sows were artificially inseminated with semen back in July.  I had a very high success rate, but didn’t want to rebreed the sows with artificial insemination in January, as I don’t have a heated barn to work in, and fear the cold would kill the semen before it even had a chance.

I am a little short on boar power, having only Taiphan, the Duroc.  If I weaned all the sows at once, which is what I planned to do, most of the sows would come into heat at about the same time and Taiphan would be overworked, probably not settling even half of the sows.

But as the sows were six weeks or so into their lactations, some of them started to return to estrus.  Taiphan could smell that, and wasn’t about to let a little wire panel stop him from doing his job.  So somehow he pushed and bent and jumped over the wire panel, breeding the sow in heat.  You can see Taiphan in the right of the photo.

At first I put my mind to figuring out how to take him back out of the hoop and beef up the wire panel enough to keep him out.  But then I realized that the lactating sows would probably come back to estrus at a rate that Taiphan may be able to keep up with.  All I had to do was be lazy and leave Taiphan in with the lactating sows.

That is just what I did, and for the next couple of weeks he bred the sows as they came back to estrus.  At about eight weeks, I weaned all the piglets, moving them to another hoop building, and Taiphan finished breeding the few sows that had yet to return to estrus.  And I haven’t seen any sows returning to estrus, so he may have all of them bred for spring litters.  As they say, “It’s better to be lucky than good!”

This entry was posted on Thursday, February 26th, 2015 at 12:14 pm and is filed under Curious hogs. You can follow any responses to this entry through the RSS 2.0 feed. You can leave a response, or trackback from your own site.