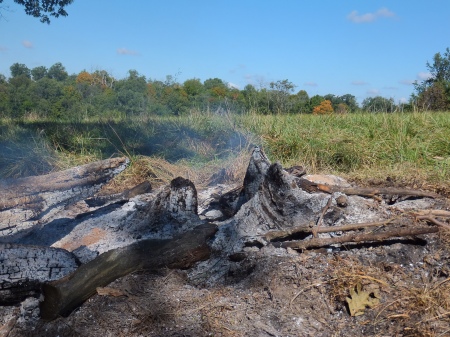 A huge crack of thunder jumped me out of bed in time to see the lightning strike.  That afternoon I saw a ton of white smoke coming from what looked like my pasture, but I knew it couldn’t be my pasture as I hadn’t started a fire and my boys don’t start fires on their own.  It started to rain again before I had a chance to check it out.  The next day I finally had a chance to check it out and to my surprise I found most of an old dead elm tree burnt up.

I have a healthy respect, (fear), for lightning.  My Dad taught me to seek shelter whenever a thunderstorm approached.  One time, shortly after sitting down in the kitchen, we jumped as lightning struck and killed a cow in the front pasture.

Examining the cow shortly after the storm passed showed signs of electrocution.  The hair was burnt off the insides of her legs and her udder.  Her rumen was distended and hard.  And most amazing to me, she was already hard with rigor mortis.

Rigor mortis is caused by the depletion of adenosine triphosphate, (ATP).  ATP is how energy is transferred within cells.  When an animal dies, ATP is depleted and results in muscles contracting and staying contracted until the carcass begins to break down.  Rigor mortis usually begins after three or four hours and peaks at about twelve hours.  The difference in the case of electrocution by lightning is ATP is burned up by electricity, so rigor mortis occurs immediately.

I’d also like to put to rest the fallacy that lightning doesn’t strike in the same place twice.  The gates into my parents’ yard were hung on two large wooden posts.  One of the posts was struck once, the other post was struck twice by lightning in about twenty years.

We think have an idea why lightning was attracted to the area as under the gravel of the road was a metal grate which ran from one post to the other.  Fifteen years ago they removed the metal grating, and the posts haven’t been struck since.  It’s still invigorating to open the gates as a storm approaches, though.

Spring starts at 7:02 AM tomorrow and 10 F is predicted with 16 MPH winds putting the wind chill below zero.  Last year it was 80 F.  With so much of my life revolving around it, the Weather is never boring.

The litters are doing well.  Less than a handful of piglets have died after the first trouble.  I’m using more straw now instead of wood shavings for warmth and adding a couple of slices daily.

In the photo below you can see scabbing on some of the piglets faces.  This is caused by fighting among the littermates.  Piglets are born with eight very sharp “needle” teeth.  It’s common in the industry to clip the tip of each tooth off with a sidecut pliers.  Sometimes the open wounds can lead to an infection.  I don’t clip the teeth and it doesn’t seem to be a problem other than the scabbing.

17 of the first 22 piglets born to my spring litters.  I guess labeling them as spring litters alludes you to my delusions, which the past six days have exposed.

I thought farrowing in a hoop building in January would be the most difficult farrowing I would ever experience.  Farrowing in huts in 30ish F weather in a blizzard followed by over an inch of rain has proven more difficult.  I guess Jude Becker purchased insulated farrowing huts for a reason.

I put one bag of wood shavings in each shelter along with a couple slices of straw.  I thought I could add straw for warmth as needed.  What I didn’t think about was the frozen ground underneath.  Last year farrowing in the hoop building I had the advantage of a bedding pack for warmth, not frozen ground.

On Tuesday a couple of sows acted like they were ready to farrow.  A blizzard was forecast for that night.  I locked one sow up in a shelter and for some reason I can’t remember did not lock up the other one.  At first light I checked on the sows.  The sow who was locked up had four out of twelve piglets alive.  The other sow had one out of ten alive.  The problem was moisture along with cold.  Snow had blown into the shelters, especially the open-door one.  I transferred the lone piglet to the litter with four.  All five piglets are still alive.

I realized I needed more bedding and it needed to be absorbent.  So I started buying wood shavings and have probably put at least four bags of wood shavings in each shelter over the past five days.  I knew the piglets needed to get dry if they were going to resist the cold.

It has been raining the past two days.  Below is a picture of a shelter I abandoned because I didn’t need it.  The rain is not soaking into the frozen ground so instead is pooling.

So I keep adding wood shavings trying to build a little dry hill for the sow and piglets.  It seems to be working.  If a piglet lives the first day, really the first couple of hours, it is staying alive.

This has been another learning experience for me.  Yesterday as the rain fell I despaired, but today I’m back to my optimistic self.  Below is probably the best litter so far.  I’ll let you know how many piglets are weaned from this difficult farrowing group. 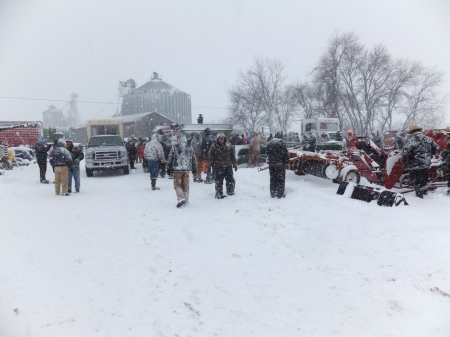 Despite Winter Storm Draco, I drove to the Hennessey Implement Auction this morning.  I purchased an old generator for $625 which will provide electricity for my farm during a power outage.  It takes its power from the PTO of my tractor.

We knew this storm was coming, so I positioned  my farrowing huts in the hay field where I plan to have sows farrow next March.  I figured it may be one of those winters where the snow is still piled high in March.  I shut the door and window on each of the huts so at least there won’t be snow inside the huts.

Yesterday I took the photo above.  Today is below. 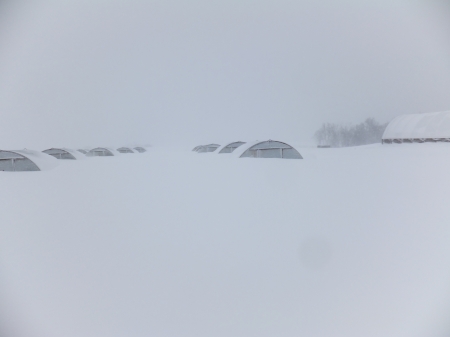 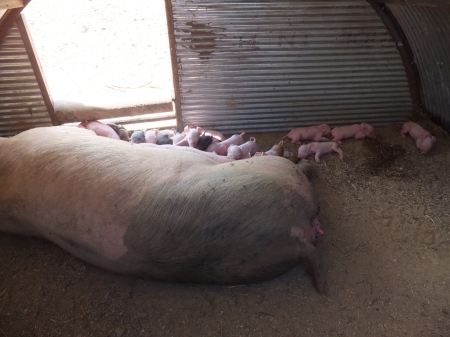 It’s too many.  She only has 14 teats, and the piglets are smaller than I like.  I won’t keep any of her offspring for breeding, as I would much rather have 10 to 12 larger piglets born per litter.  But it’s still nice to note a record.

I went to an informational meeting on how crops are being affected by the drought, and how we can use the stressed crops.  The University of Wisconsin Agriculture agents lead the meeting.  It was well attended with many interested farmers.  The meeting was a little depressing, but my troubles were put into perspective as I drove home.

When I drove to the meeting I noticed a line of people on the sidewalk near the Catholic Church.  I wasn’t sure why they were lining up.  When I drove home, the line was huge and leading to a semi trailer which read something like “Catholic Mission” on the side.  The people were lined up to get food. 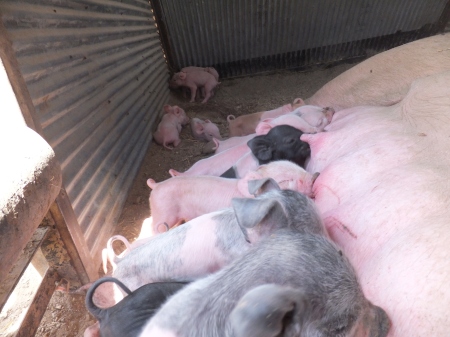 My white herd boar, Able, was dead this morning.  He’s the one pictured breeding, above.

I don’t know for sure why he died, but it was probably heat related.  It reached 100 degrees here yesterday.  I had a sprinkler going for him and the sows, but there was a sow in heat.  I think he probably tried to breed and just got himself to worked up and was unable to cool down.  Once hogs get over-stressed in this kind of heat, it’s trouble.

The only good news is I kept a son of his this spring.  He’s looking pretty good.  He’s the white spotted one in the photo below.  I’m thinking of naming him Domino.

The great drought of 2012 continues.  It was the only thing people talked about during the 156th Lafayette County Fair this week.

The permanent pasture my steers and hogs use is drying up fast.  My backup plan is to graze hay fields.  So I put a temporary electric fence in and started grazing a hay field, pictured below.

Summertime droughts are not uncommon here.  Rarely do we have crop failures, though.  So irrigation for crops is not used.  An exception is my partners, Carrie and Eric.  They rely so heavily on their pastures for chickens, sheep, and dairy cows, they’ve decided to put in a pasture irrigation system called K-line.  I’m interested to see how it works for them.

Daffodils above and a Plum tree below.  The winter without a winter is followed by the warmest March ever.  Everything is at least a month ahead of normal. 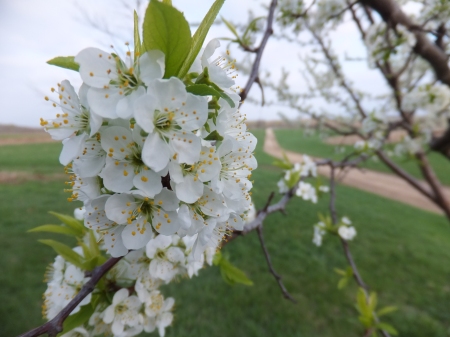